The armed forces of India 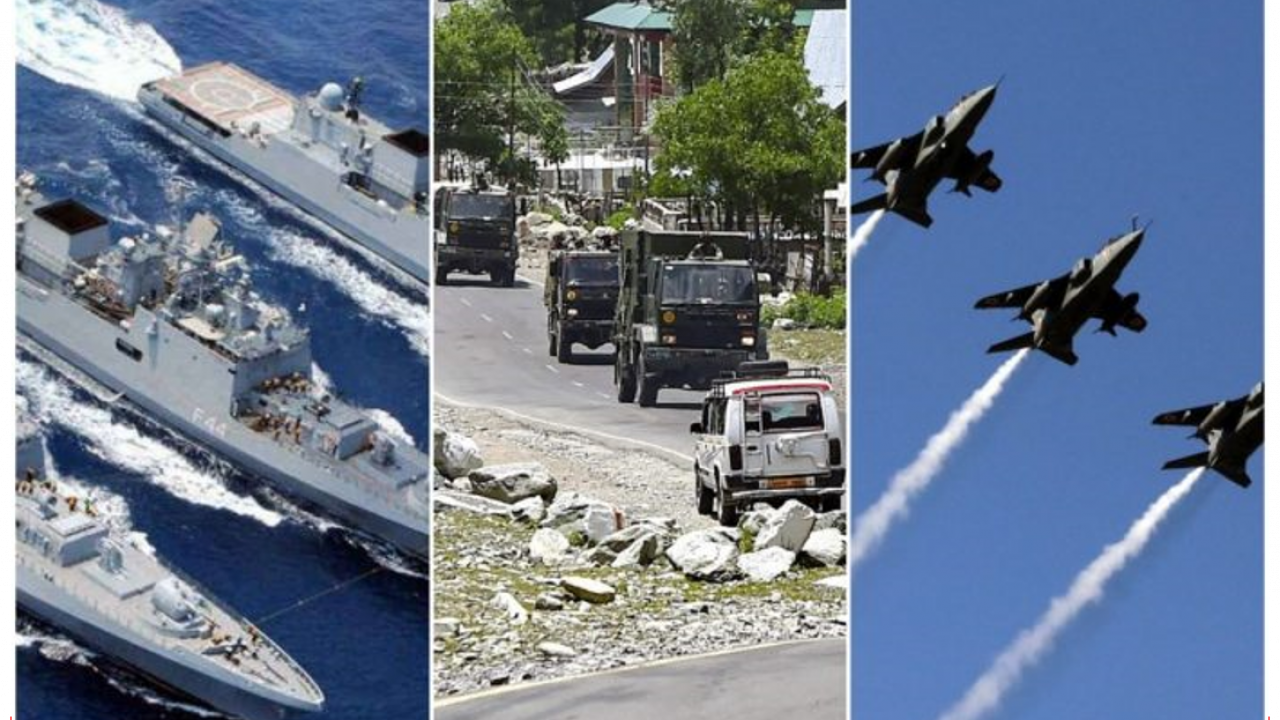 There is clarity that the Chinese did something typically characteristic of China – “Attempted a stab in the back”. Post the agreement of 06 Jun, the Chinese pretended to disengage from the Galwan Area. In doing so, they lured a small party of 16 BIHAR into a premeditated ambush. When reinforcements led by the CO of 16 BIHAR came to the rescue of the ambushed party, they were apparently attacked by a larger Chinese party in hiding. Further reinforcements from the battalion and 3 Medium Regiment, an Artillery unit deployed in the vicinity rushed in from our side. Pitched hand to hand combat started. Slowly the tide turned due to ferocity of our counterattack despite being outnumbered 3:1 by the Chinese. The treacherous Chinese plan, as reconstructed, was to heavily outnumber and massacre the Indians in the ambush. After achieving that, proclaim that the Indians violated the agreement and interfered in their ‘peaceful disengagement’. Globally, pose as the disciplined and innocent Chinese who defended themselves against an aggressive Indian Force in their territory. They would declare themselves as the injured party to spin a story that what they did was in self-defense. A small Chinese Force slays a stronger Indian Army! What Propaganda! What Myth! The idea was to teach the Indian Army and the world a lesson through influence ops - DON’T MESS WITH CHINA. THE CONSEQUENCES WILL BE BRUTAL. This tactical action would have huge geostrategic ramifications and gain.

Unfortunately, they came across the Indian Army which fought back with unexpected ferocity. In this melee many Chinese bunched up on a ledge. It gave way and many of them fell to their death. That is besides those who suffered at the hands of the outnumbered but ferocious Indians. There is no doubt that India lost a brave Commanding Officer and 19 soldiers, but our valiant soldiers inflicted out of proportion casualties. Galwan will go down in the annals of Indian Military History as an incident which upset China’s applecart. Yes. This tactical action will have great geostrategic ramifications; not in the way China imagined.

It is an old saying that 100 soldiers marching on a bridge makes it collapse. Hereafter the saying will be ‘300 dumb Chinese soldiers standing on a ledge will make it collapse’. What were 300 soldiers doing on a Himalayan ledge bunched up like goons on the Shanghai waterfront? It is obvious that the Chinese have no concept of the Himalayan Terrain, where maximum casualties occur due to the environment rather than enemy action. In any case the overall behavior of the PLA has been so poor that it does not befit a modern Army or a great power. If anything this action has exposed the severe character and tactical flaws of PLA. The Indian Army will hereafter exploit it ruthlessly.

Which nation or Army hides its casualties? One that does not have honor or one that is outdone or one that fears the outcome of the casualties it has suffered. I find shades of all three in the PLA. It is dishonorable to carry out a premeditated ambush after an agreement to disengage has been reached. It is not the time-tested code of a noble soldier or a warrior. It is the DNA of ignoble thugs. You plan an unethical ambush. You outnumber the opposition. You suffer casualties which you do not declare. You are outdone Chinaman! China fears declaring casualties. Are they more than even the intercepts? Weibo chatter suggests so. There is also apprehension and tension there. Despite the Chinese canard to downplay numbers to control the situation, prevent escalation, and claim victory; the reality is different. If the numbers are declared, the true worth of PLA soldiers against battle hardened opposition will be nakedly exposed. If PLA suffers more than twice the casualties in a preplanned ambush where its strength is thrice that of Indian Army, where will the morale of PLA be?   In the BOOTS! Clearly the PLA has suffered unexplainable and undisclosable casualties in an ambush it has meticulously planned as a coup de grace. That was pretty apparent from the face of the Chinese Spokesperson Zhao Lijian. Normally he is incisive, sharp, and arrogantly dismissive. He bristles with aggression in his answers and in brushing off queries. He was the poster boy “Wolf Warrior” of China when the Wuhan Virus was blooming.  When the presser was held on the Galwan Incident, he was subdued and evasive like a ‘Bheegi Billi’ (wet cat). Obviously, the numbers were playing in his head. None of that customary swagger was evident in his body language. He was deliberate and repeatedly side-stepped questions on the number of casualties. This ‘Wolf Warrior’ had become a ‘Gidad’(jackal). This article is written in The Global Times mold.  The Global Times reports on this action are like ‘meows’. Read them. That Editor should know how it feels to read an uncouth article. (I hope he reads it). Let us be clear. PLA is not yet up to it. Spare a thought. The Chinese Soldiers who laid down their lives fighting for their cause, deserve honorable last rites. Even that has been denied to them. Sad. What is this nation which does not honor its dead? It is the nation called China run by the Communist Party which once drove its people to cannibalism. Why? Food was being exported to enrich the Communist Party when its own people were being driven to death by starvation. Honor seems to be nonexistent in China. Great Civilization! My foot.

There are strategic ramifications of Chinese actions in Galwan. India will not yield or blink.  There is political consensus to face up to China. India will only harden its stand. Status Quo Ante as of April 2020 or nothing. If that does not happen, the LAC will remain manned fully. Which means China can not pull its troops out if the situation deteriorates elsewhere. This will slowly but steadily build and solidify world opinion against China. Others will also show eyes. Matter of time. If the tension lasts, as it promises to, all economic ties will go Southwards. The people of India will ensure that. The longer this tension lasts and the longer the Virus lasts, the greater will be China’s problems. The larger ramification – never trust China. This is another stigma which the nation must bear alongside its pet virus.

I think China has very seriously miscalculated on the Indian Armed Forces. They should know what they are up against. The India Armed Forces are the toughest in the world. Did those stupid Pakistanis not advise the Chinese?  They should know that in 1971, Captain Mulla of Indian Navy went down with his ship in an awesome example of sacrifice and embracing death in the highest traditions of a soldier. However, is that too ancient? Let us get to recent examples. Wing Commander Abhinandan was captured by Pakistan in 2019. The best comment about him came from a US originated Tweet. It read -  ‘If that dude sporting a moustache says he killed an F-16 then he did. After a dog fight, ejecting, being beaten up by the locals and interrogated he complimented the opposition on the quality of their tea. Balls Incarnate’.  Cut to the chase. Anand Mahindra, the well-known industrialist tweeted ‘Watched the parents of martyred Col. Babu being interviewed on TV channels. I was struck by their composure, courage & pride. If this steel spine runs through all parents of our armed forces personnel, then our adversaries should recognize they are up against an unyielding force’. That is the Indian Army, Navy and Air Force – Unyielding and Tough.

An incisive message is on the social media probably, by an ex US Marine, says   "As an ex-marine, I'll say this: India is the most unrecognized power in the world. Most of the East India Company and later the British Raj was made up of Indian soldiers who were used to control Asia and Africa. They fought in Afghanistan. And more recently in 5 wars with Pakistan. They also fought 2 wars with China, 1962 and 1967. In 62 they were unprepared but in 67 they won against China. Also, 2 million Indians fought in WW2 for the British. And, Indian troops in the UN peace keeping mission are the best performers during operations.  India also won 1 major mock air force war against USA during training, some years ago -- surprising us all. Mate! China has no clue what it is taking on. Not to mention the Indians have been fighting wars on and on for centuries."

Finally an ex GOC of the Trishul Division, now retired, said - Imagine what a huge setback for PLA and China if a premeditated and planned op goes so horribly wrong that they lost large number of troops… I think our troops have done a fantastic job. They have taught Chinese a good lesson.  Minus 6 degrees C, at 16000 feet plus, went to their occupied position, knocked out 30 plus of PLA. Great work by IA. He knows the reality of what his Division has achieved.

Every Chinese citizen who is reading this article should take note of what the PLA is up against –  Unyielding Hardened Steel. All the best. Forget your propaganda videos. Let us get real.

Every Indian citizen should know who is defending them and against what. Be proud that your Armed Forces are laying down their lives without a second thought to overcome all odds so that you can sleep well at home.

The Indian Soldier is the best in the business irrespective of the color of his uniform.  As a veteran, my only request to my country is – please Arm these boys better and Pay them well. They will win the world for us.

How much the scalp of a US soldier is

The CIA disclosed some state secrets to use them as a...

The armed forces of India

There is clarity that the Chinese did something...